Afrogrooves is a growing community of people with a shared love of West-African music. During open jam sessions the hypnotizing sounds of afrobeat, afrofunk and highlife are explored and celebrated. While music is sometimes unjustly depoliticized, Afrogrooves, as a platform and music collective, takes a stand against racism, sexism and other forms of oppression. Together we try to create an inclusive and creative space for highly danceable energetic music. 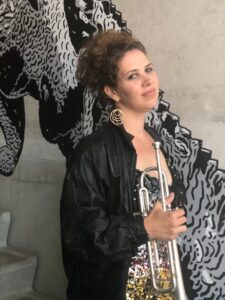 Abriel Ferreira is a Dutch-American trumpet player based in the Amsterdam area. After completing her Bachelor’s degree in Jazz Trumpet at the Amsterdam Conservatory in 2019, Abriël has established herself as a multi-facted professional across genres. She has worked as the trumpet player for the Dutch and Belgian tour of Annie the Musical, as well as in the trumpet section of the prestigious Henk Meutgeert & Peter Beets New Jazz Orchestra, performing with this young big band at the major Dutch jazz festivals and venues, including Bimhuis, LantarenVenster and the Concertgebouw. Other groups Abriël is active in include; funk band The Pocket Exchange; the big band The Amsterdam Funk Orchestra; the Afrobeat band Kiala and the Afroblaster (led by former Fela Kuti guitarist Nzavotunga). She is also a member of the collective Afrogrooves, which organizes several events connecting the political and social power of music. 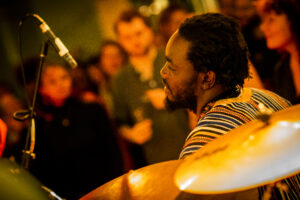 Ibou Ndong is from Dakar (Senegal) and lives in NL since 2014. In the past 15 years Ibou developed himself into an excellent Djembé player. He was born in the ghetto of Dakar called Medina which is full of life and artists. There he got influenced by his friends that were playing Djembé, giving him a lot of energy and enthusiasm for music. Later he entered “Centre Culturelle Blaise Senghor” and subscribed to be part of the Ballet as to perform with the company. Later he also took part in another group called Asico and several Raggae bands as a percussionist. Since his arrival in Amsterdam he started sharing his quality with others, giving workshops and playing on jam sessions, festivals and gatherings all over the Netherlands and Belgium. Ibou has been coming to our jam sessions for quite a while and we love the energy he brings! 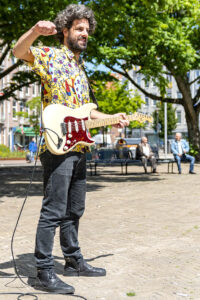 Mark Oomen has been leading the Afrogrooves sessions from the very start, driven by a great passion for afrobeat music and an even bigger love for connecting people and making music together. Just like Robbert Mark has been a part of Zitakula, playing both guitar and tenor sax. Next to being a performing artist, composer and recording musician, Mark is active in the field of education, giving classes, tours and workshops to elementary school pupils and high school students on a variety of locations. 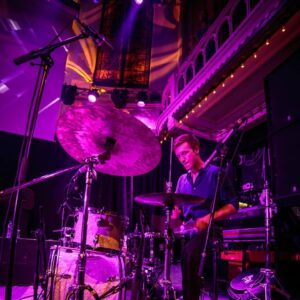 You might know Robbert Jaspers the drummer of Zitakula, the band with which he toured many big stages, festivals and venues in the Netherlands and abroad, including Paradiso, Oerol, Noorderslag, Wicked Jazz Sounds Festival, Zwarte Cross, DWDD and many others. Next to this, Robbert was also part of the house band from the very first Afrogrooves session at Blijburg aan Zee in the summer of 2017. He has been a steady force during the sessions ever since, bringing his skills in afrobeat, funk, hip hop and soul drumming, with a deep focus on ‘groove’. 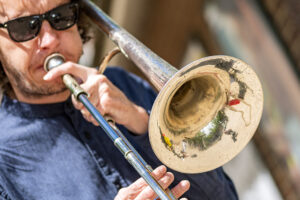 Trombonist Oliver Emmitt obtained his bachelor’s degree in New Zealand in 2006 and after that he played in a wide variety of formations and ensembles. With these ensembles/bands he has toured Europe, South Korea, America, Australia and New Zealand. He was involved with Batucada Sound Machine, Bannerman and Tiny Ruins, among others. In 2012 he moved to Amsterdam where he obtained his Master’s degree at the Conservatory in 2014. He currently plays in various projects such as Chef’Special, Molino, Benedict, Kiala and Afroblaster, Afrogrooves, Henk Meutgeert-Peter Beets New Jazz Orchestra and BVR big band. 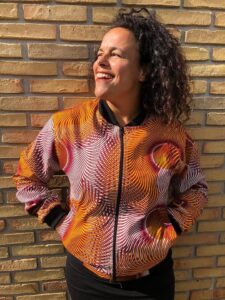 Yinske Silva’s work is about the voice, in many ways. On stage she is a singer, improviser, stand up presenter and moderator. Besides the stage she is a voice teacher, among others at Mezrab Storytelling School, Theater School De Trap and Roy Hart Center NL. She also works as a (provocative) coach (Voice Dialogue) and trainer (including the diversity cards of Marten Bos). She is always looking for people’s voices and stories in everything. She has developed her own method in presentation training for singers and speakers. With her own workspace Roelantstraat10 she offers space to makers. Her style is characterized by cordiality, individuality, humor and sharpness. 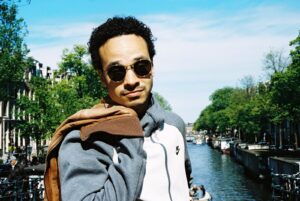 Thomas Hanenberg can be seen “on stage” with all kinds of projects at festivals, TV and large pop halls. He currently plays in bands such as Akwasi, Abintu, Gumbo Kings and Benjamin Fro. In addition to his role as keyboardist, he is also often in these bands. composer/writer Thomas has worked with various artists such as Zwart Licht, Bakermat, Kenny B, Typhoon, Nicole Bus and Rob Dekay. He graduated from the Utrecht Conservatory, Jazz & Pop in 2016 and was taught by virtuoso pianist Bert van den Brink. Thomas is involved in different styles that are close to him such as jazz, hip-hop, soul, afro-jazz, latin and highlife. 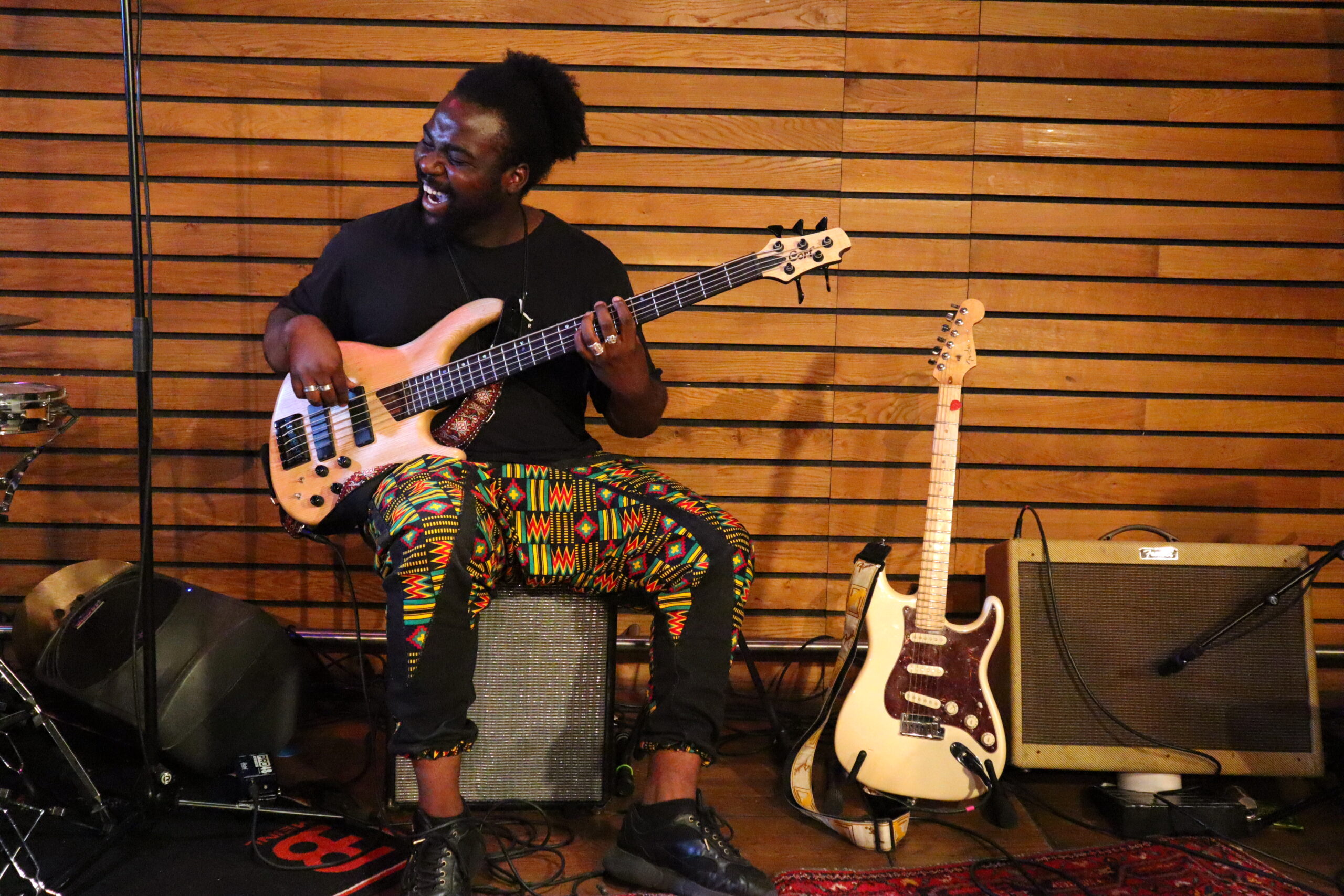 Jermano Hoop has been a steady force in the Afrogrooves band for a while now. The Suriname-born, Netherlands-raised bass player has been playing music for all of his life. Starting at age 6 with percussion and quickly moving to bass as well to make that his main instrument. He has been playing with a multitude of different groups and formations in a wide array of styles, from Afro-Caribean music to jazz, hiphop, R&B, funk and gospel.