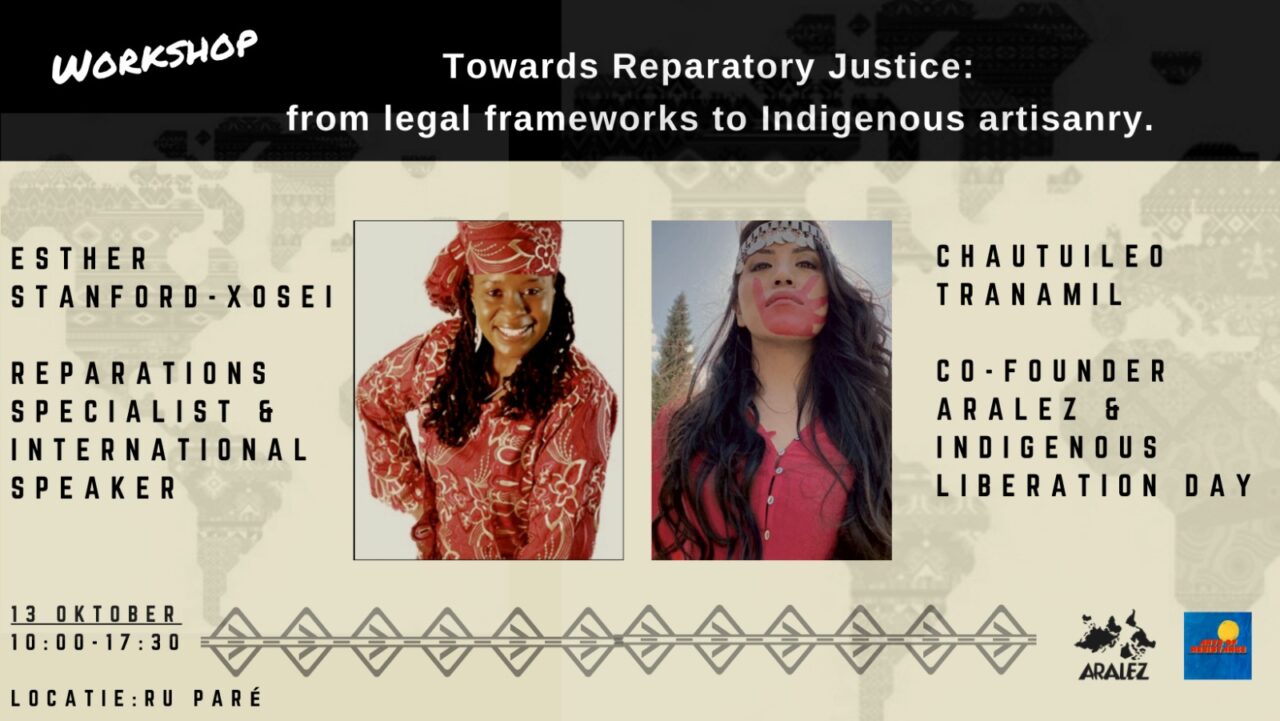 On Thursday 13th of October, the UK-based Pan-Afrikan Reperationist Esther Stanford-Xosei and Mapuche-activist Chautuileo Tranamil will give a two-part workshop, one day after Indigenous Liberation Day Festival. Participation is free of charge, but there will be a limited amount of spots available. Therefore, we ask people to apply for the workshop through this form: https://forms.gle/q8LZVQZEigaoRTxw6

Deadline: We ask people to send in an application form by the 1st of October at the latest. Application is open to everyone, but if we receive to many applications we will select participants on the basis of their motivation (150-250 words) and background as activists, artists, artisans, reparationists, Indigenous peoples and/or peoples of African descent. You will receive an email with confirmation and more info about the workshop by the 3rd of October. If there are still spots available after the deadline, they will be given on a first-come first-serve basis.

Workshop info:
After having smashed and put to justice our colonizer’s through the 1492 People’s Tribunal on October 12th, it is time to talk about reparations. How do we heal from colonialism? For this workshop we have invited an International Law Expert Esther Stanford-Xosei on the practice of (holistic) reparations and reparatory Justice. Next to this we will have a creative workshop on improving Indigenous visibility in our actions and demonstrations with chautuileo Tranamil.
Western imperialism has murdered hundreds of million people worldwide: 225 million through the system of chattel slavery, 175 million on the continent of Abya Yala through the Indigenous genocides, 120 million through the imperial famines in India and China, just to name some of the largest tragedies that befell the Global South over the last 500 years. Apart from genocidal violence, the colonial system ravaged the cultural, economic, political, ecological, spiritual and aesthetic systems of entire continents in order to subjugate them. Repairing the damage is not just about history – it is about changing the neo-colonial present and transforming the world in the image of justice.
This workshop aims to give activists, jurists, artists, artisans and concerned citizens the tools to participate in the global movement for reparations. Arts of Resistance and Indigenous Liberation present a two-part workshop by Esther Stanford-Xosei and Chautuileo Tranamil. Participants can choose to sign up for both workshops and/or lunch in between, or choose to attend only one workshop.

The first part, hosted by Esther Stanford-Xosei, will offer an overview of what it means to repair and what legal and activist tools we have to address reparations, ranging from UN reparations frameworks to lessons learned from the International Social Movement for Afrikan Reparations. Special attention will be paid to reparations for Indigenous people’s worldwide and the Maangamizi, the Afrikan Hellacaust. After a short break, we will have an interactive work-session guided by Esther, where people can get the chance to work out their own actions and campaigns – whether legal, cultural or political – for reparations.
The second part, hosted by Chautuileo Tranamil, will teach people to use Indigenous symbolism and techniques in various forms of protest arts and artisanry, ranging from banner- and flag-making to weaving bracelets in Indigenous designs. As such, she will offer practical tools for starting the process of cultural repair for Indigenous people’s and their comrads.

About the workshop-facilitators:
Esther Stanford-Xosei is a jurisconsult (legal specialist in jurisprudence), reparationist, (reparations activist), Ourstorian and dynamic community advocate specializing in the critical legal praxis of ‘law as resistance’. She is a modern day abolitionist and freedom fighter, passionate about law, justice and education and using those as tools in resisting forms of oppression and injustice.
Chautuileo Tranamil has worked on a global scale with grassroots communities, especially Indigenous peoples. As a Mapuche-Pewenche herself, she is committed to the well-being of Indigenous communities around the world. Through her work, she is always celebrating the spirit of Indigenous peoples, and honoring their rights, cultural beliefs and local practices. She is the co-founder of Indigenous Liberation and Aralez, a collective for decolonization.

Indigenous Liberation Day Festival & March:
This event is part of the activities surrounding Indigenous liberation Day. On October 12th, Aralez is organising a day full of activities as part of Indigenous Liberation Day: a solidarity march, Mapu commemoration and solidarity ceremony, a 1492 people’s tribunal, cultural performances and panels. Together we reflect upon on the day that Columbus invaded Abya Yala (the American continent) in 1492. A date that marks the symbolic beginning of European colonialism. Resulting in the break-down of the right to self-determination, identity and culture of Indigenous People’s worldwide. Indigenous land defenders are still displaced and killed; rivers and environment polluted; and land being colonised for large multinationals. The result is the current climate crisis. Therefore, it is time for reparations, justice and decolonisation!
Find the full program here: https://dezwijger.nl/progr…/indigenous-liberation-day-2022 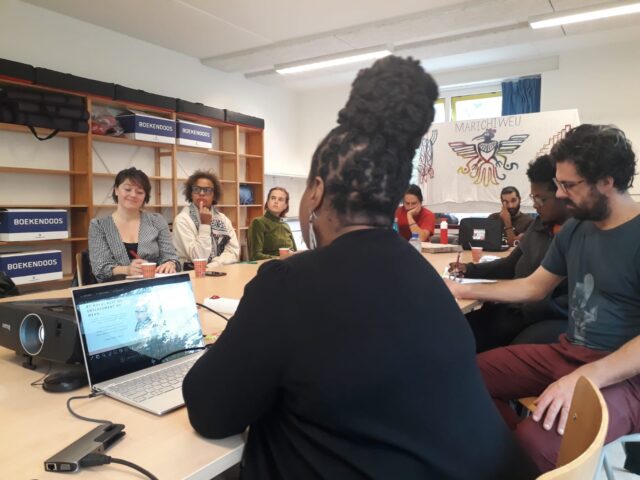 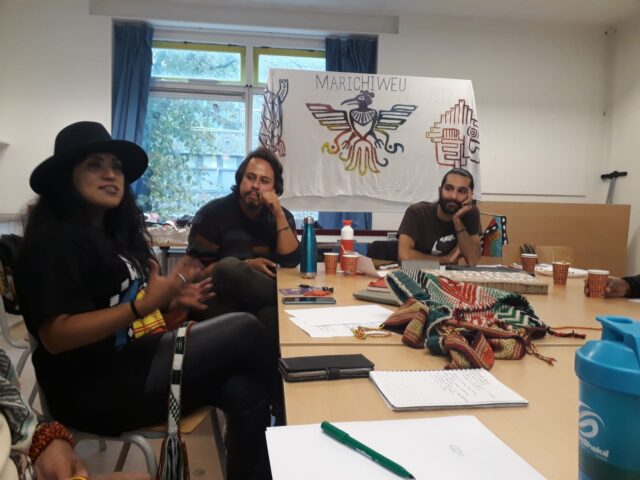 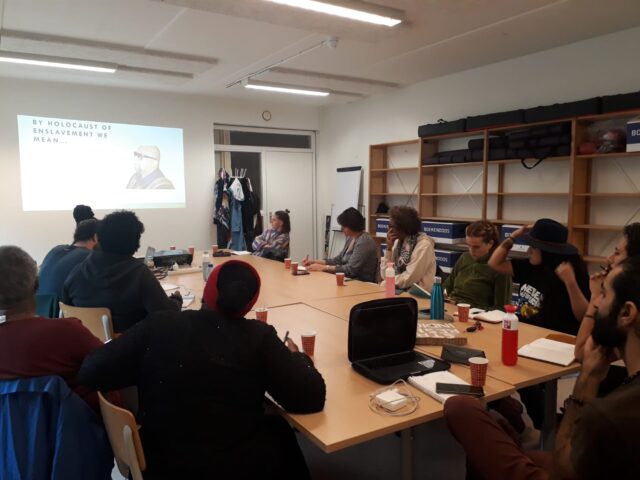 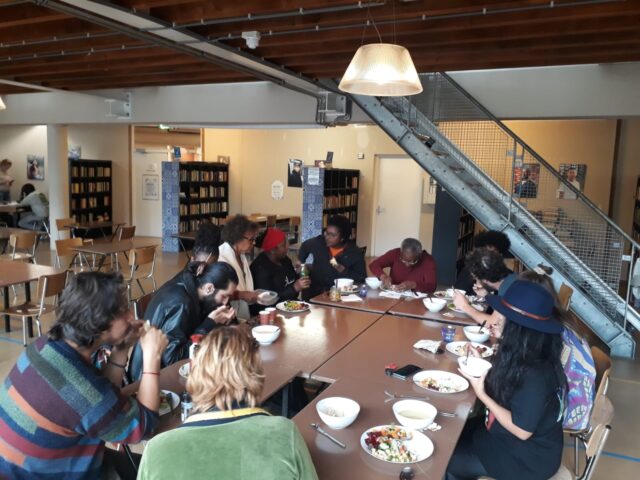